The fifth book in the Bio of a Space Tyrant is actually the last self biography book in the series. It covers the time from when Hope Hubris is dethroned from the position as the President of North Jupiter until his death.

The last book ended with Hope being kicked out of office from the position as the Tyrant of Jupiter. He was also exiled and take up the job of helping an old friend, admirall khukov at Saturn. 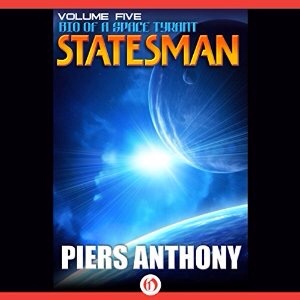 He has the dream of expanding the human society from the solar system, to all over the Milky Way, by the help of the new light drive. This transforms a ship and all its inhabitants into light, transfer it to the receiving station, and then turns it back into light.

There are of cause a lot of obsticals on the way. The first of it is the nomenklatura of North Saturn. They are not willing to relinquish power and Hope's first job is to change part of the Saturn society. He will basically do the same thing to different aspect of Saturn industry as he did to the Jupiter one.

So Hope and Spirit, whom also followed Hope into exile sets out and tries to start the reform. After some time the attempts on Hope's life get to bad, and they take of, out in the solar system.

This part of the book is more or less an exposed of all the planets and societies in this future solar system, where Hope and Spirit tries to Winn over all part of the solar system society to join in the dream of the disparate into the Galaxy.

There are a lot of interesting plot lines and excitement as they travel the solar system, as we'll as some nice sex, and a few space battles. So there is something for everyone.

This book I also listen to from audible, and again Basil Sands make a wound earful job of making the characters come to life.

As said before, the grand scale and wits as the Piers Anthony paints in this book makes it a true grand space opera book. And as it brings the saga to a conclusion its defenetly something you have to read.

There is one more book in the series, The Iron Maiden, but that is the recap of the serie from Spirits point of view.