I have payed STO (Star Trek Online) for quite some time now. I have been around for 637 days now so my 700 days awards is coming up fairly soon. I started to play roughly 4 month after the game when online and have been playing (and paying) since.

Even when the game went Free to Play I stayed on as a subscriber.

END_OF_DOCUMENT_TOKEN_TO_BE_REPLACED

After finishing the Poswersat book, the next one on the schedule was “Empire Builders”. 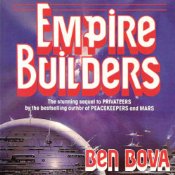 This is the second book about Dan Randolph even if it was writte well before Powersat.

The earth is heading towards a greenhouse cliff, a sudden climate change that will destroy much of the planet in ten years if something isn’t done soon. The ice caps will melt. Cities will be flooded. Millions will die. When Randolph tries to let people know what’s going on and try to help orchestrate a plan to avoid this catastrophe, government officials from the Global Economic Council (the GEC) confiscate his company, imprison him, and silence his scientific team.

The story continues and as usual it quite good and i find the book hard to put down, or stop listen to if you, like me listen to the audio book.

Stefan Rudnicki does an very excellent job adjusting his voice to each of the characters so you get a god idea of who speach. Speech tags become redundant. He captures a variety of accents well, and the voices match the personalities. He tries hard to get the Japanese right, but it doesn’t roll off his tongue well.

Its even a bit scary to think that this book was written back in 1993 and quite well talks about some of the problems we have been facing today. The tsunamis in Indonesia and the flooding of New Orleans.

You can find the audiobook at audible.com