The fourth book in the series covers Hope Hubris time as the President of North Jupiter, or as many called him The Tyrant of Jupiter, until he gets dethroned and sent into exile.

After the problems of getting in to office, as Hope's archrival Toscin refused to yield power, he has to start reforming United States of Jupiters economic system as his power comes from the constitutional convention that apointed him the ultimate ruler. 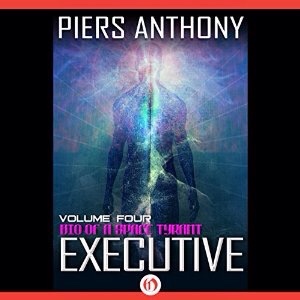 As he now is separated from his wife Megan, he now has more time to endulge in different woman. So this book has more sex, even if most of it is impled and not to graphic.

The first problem was to set up the new government, and this is the first problem that has to be solved. Hope set ut trying to do what he was aponted for, and rebuilds the Industry, agriculture end even the Education system of North jupiter. The first real problem evolves when he takes on Big Iron. Big Iron is the Energy industry, and the compareson to todays Oil industry is more than a ploy. The Iron Industry cartell is call IPEC so its much of annoligy to today (well the 80:th when it was written).

The Iron Industry tries to kill Hope and managed only to kill his belowed secretay. And this puts Hope into a kind of madness. This evloves during the book and has its hight in the end when he gets overtrown by the least suspected person. I wont spoil the plot for you here.

Duing the latter part of the book Hope is mascarading as a worker (to start with) more or less oposed to the Tyrant. He even becomes involved in to resistans to the current rule and this leads up to the end of the book.

This is also from audible, and has the same narrator, Basil Sands, and even here he maks an excelen narration.

The book has less of space combat than the previous, and a bit less action, but that is more than enogth compensated by all the interesting plots in the book as well as the interesting social diskussions that could come up from att the ways they solve Jupiters problem.