The third book in the Space Tyrant series takes the story from the time when Hope and Spirit leaves the Jupiter navy and end when he becomes the President of North Jupiter.

When Hope and his family fled Callisto (in Refugee) he met hist first love, Helsie, but she was killed. A bit later his meets a Scientist on Io that has a niece called Megan that reassembles Helsie and one that Hope could love. When Hope's and Spirit's tour in the Jupiter Navy is over and they start in Hope's political career, they also approaches Megan and tells her that Hope intends to marry her. 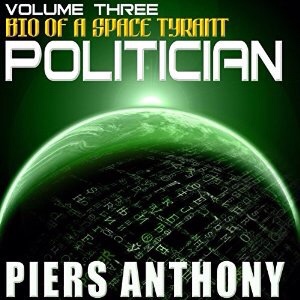 Megan is first very apposed to this, but acquiesce, and becomes Hope's wife as well as political teacher.

This book follows their, and Spirit's, rising career from a simple local politician thru there rice in power from a local politic scene to the end goal, become the president if North Jupiter. But the book is not linear in a normal fashion.

It all starts with Hope being imprison in some kind of prison, as well as being mem-washed. Due to the fact that Hope imune to drugs, he manage to restore his memory with help of key words that trigger his memory. So the book jumps back and forth between his recollected memory and his current situation.

The main politic opposition in Toscin, a ruthless politician that has all the bad characteristics. He takes bribes, or special interest money, and was the one that made Megan quit the politic. He will be Hope's arch rival during the rest of the series. As a reflection one can see that Toscin has a lot of resemblance with Richard Nixon.

We will also meet thorley, who is one of Hope's most vocal critics, but in a true heroic fashion saves Megans life when someone tries to kill Hope. This leads to Hope's promise to never suppress the free press and also that Spirit will help him during his recovery process. And this will lead to other interesting things.

The book ends when Hope takes power away from Toscin, who refuses to abide by the election result that elected Hope to be the new president, and becomes the Tyrant of Jupiter. And in that way also looses Megan as she cant approve of the way he had to take power.

The third book in the series, also from audible, is very interesting, especially as the plot is not straight forward, and we learn things in the same way as Hope is finding them out again himself.

The only thing perhaps is that it has not as many space battles as the previous one.

It's the same narrator, Basil Sand that reads this one to, and he makes a excellent job just as the other ones in the series.

So this is another 5 star book.