Mercenary is the next book in the Bio of a Space Tyrant series. This book is the continuation of Hope Hubris selfwritten biography, and takes the story from the time when Hope enters the Jupiter Navy and until he leaves it to start his political career.

To get out if the refugee status and more or less slave labour work he had picking fruit and vegetables Hope becomes enlisted in the Jupiter Navy. He encounter a drug addict but brilliant mind in commander Repro, who has the dream of creating the best navy regiment of any time. 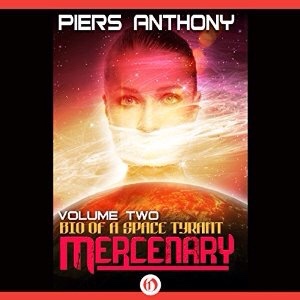 With the help of Hope's ability to read people that start in creating the force, gathering competent officers from all places in the navy.

Piers Anthony has a very open mind and the sex in this series of books is often quite graphical and, I have to say, quite arousing. If the sex in the first book was mostly very bad and consisted mostly with rape and the handling of that in different ways, in this book its far more positive.

Even if it can be strange to say that the marriage of Hope to his new wife Roulette starts with a rape, thats more of a ceremonial rape, and gives thought to different customs we have even today.

The new military unit they created, got their first assignment to eradicate the pirates from the Jupiter ecliptic. As this was one thing that Hope promised to do after his pirates encounters in Refugee, hi liked this assignment. The new unit performs excellently and in a short time they managed to accomplished its task.

This leads to bigger assignments and now its time to take on the real pirates in the system, the pirates of the belt. The asteroid belt are full off different pirate factions, and this gives time to make excellent space battles. And if you are a desk strategist you will love the fine brush strokes that Piers is using when he describes all the space battles.

One of the side stories here is of cause the introduction into the plot of Hope's new wife Roulette that was the daughter to one of the pirate fraction leaders. The rape scene when Hope marriage her is – if you can believe it – quite outstanding.

The book ends when the new unit is to efficient and Hope and Spirit is forced out of the navy and will start thepolitical career that is the next book.

Again I have read, or actually listen to this book from audible, and the narrator is still Basil Sands.

The audio narration is very good, he is using a bit different sounds for different characters so its easy to follow who is saying what.

And with as good story as this it can't be anything except 5 stars.