This is the first book in the Bio of a Space Tyrant series. If starts Hope Hubris life story starting as a poor hispanic child on Callisto (the equivalent if todays Hispaniola). It begins with Hope and his 2 sisters being assaulted by a older Sion that tries to have his way with Hope's older sister Faith. When Hope humiliates the sion this sets in motion all that leads up the the rest of the series. 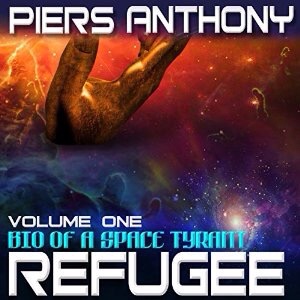 Basically whats happening in the book is that Hope's hole family exits the bubble city where they live on Callisto and aims for a refugee bubble. First they get swindles out of money and then the refugees is left by them self in the bubble without the crew, so they have to make do with there own knowledge. If this isn't enough they encounter pirate party after pirate party.

Hope's father gets killed very early on, and all of Hope's family members are damaged or killed. This book is very gory and there are a lot of killings, rapes and other things so its not really anything for the week-minded.

But as most of the backstory for the rest of the series gets its foundation here its important to read. Hope's mother is killed off at Io, Hope's older sister Faith has to be a sex-slave for one pirate parties to save the rest of the refugees. Spirit gets her little finger cut off, as well as having here face scarred and later on has to be a cabin boy (yes boy) at another pirate vessel.

Finally Hope gets to jupiter and becomes a low fruit and vegetable picker among other refugees.

I got the audiobook from audible as usual and its read expertly by Basil Sands.

Even if this is my last favourable book in the series, its a must to get the background. And even if the story is kind of depressing, there are parts that are funny, and again, all builds the backstory and give insight into the character of Hope Hubris.

One thought on “Bio of a Space Tyrant: Refugee”