This book in the Grand Tour series is a bit different from the other ones. Most of the main characters we haven’t met before. One of the connection to the previous books is Holy Lane, younger sister to Pancho Lane, the head of Astro corporation that we have grown to know during the prevision books.

The book is about the space habitat Goddard, filled with political exiles, social misfits, scientists, and engineers, is on its way to orbit around Saturn. There, the habitat will become mankind’s first offworld colony. 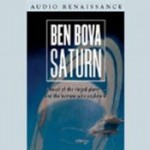 Holly has fallen in love with the human resources director, Malcom Eberly and she’d would follow Eberly anywhere. Unknown to here, the New Morality, the theocratic government that has taken over running Earth, has decided to ensure that the freedom-loving and anarchistic scientists and engineers on the Saturn mission don’t take too many freedoms.

The new morality is one of the main, behind the scene powers in many of the books.

Suspicious of Eberly, Holly’s older sister Pancho requests the aid of interplanetary stuntman Manuel Gaeta to watch over her. The habitat administrator James Wilmot don’t want Gaeta to go down to surface of Saturn’s largest moon and have it contaminated. Enter nanotech expert, Dr. Kris Cardenas. She proposes to use nanobugs to decontaminate Gaeta’s space suit before the spacewalk.

And behind this Wilmot observes all of this with clinical detachment. And he also reports back to the New Morality HQ in Atlanta. This is a great experiment in human society building and as usual there are a number of plots and twists that will keep you listening to the book almost without putting it down. And when there is a threat to Holy’s life the suspence builds up…

Its a great book, but perhaps not as SF as most of the other books in the series. It handles mostly in the darker side of humanity and is really a story about building a society and the dark side of humanity, mostly with a SF backdrop. The characters’ ambitions is perhaps a bit too obvious, too cliche’.

You can find the book here on audible.