Next in the series that i have done is “The Aftermath”. This is basically a book with 3 major plots.

The fist plot line is the story about the ore-carrier Syracuse This ship is ownd and operated by Victor Zacharius who makes his living running the ore-carrier Syracuse with his wife and two children. He travels the Asteroid Belt, hauling whatever cargo can be found. They have the unfortunate luck to run in to Doric Harbin when he destroys the Chrysalis Habitat (in The Rock Rats). 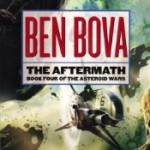 He attacks them and Victor flees in a control pod to draw the attacker’s attention away from his family. Now, as his wife and children plunge into the far deeps of space, Victor has been rescued by the seductive Cheena Madagascar. He must do her bidding if he’s to have a prayer of ever seeing his family again.

Then the plot evolves around how Victor tries to find them and how they survives on the crippled ship traving through the asteroid belt and even into Jupiter’s orbit.

The second path of the plot is about Doric Harbin (now called Dorn) and Elverda Apacheta, the solar system’s greatest sculptor. Dorn and Elverda lives and destinies have been linked by their joint discovery of the alien artifact that had, in The Silent Wars, made Martin Humphries crazy. Similarly transformed by the artifact’s mysterious powers, Elverda and Dorn now travels the Belt, trying to find the bodies of the many victims of Harbin’s atrocities so that they can be given proper burials.

The third plot line is about the Viking, owned by Martin Humphries, who’s determined to kill Dorn and Elverda because they saw the artifact and what it did to him. But Viking’s second-in-command, Tamara Vishinsky, appears to have the real power on board ship. This also leads to the prowe struggle between Marting and his son about the control over the company.

The book is extremely well written, and hard to put down (stop listen to). It’s a very “human” story, written well with down-to-Earth motivations and goals. Elvedra accompanies him out of an adopted maternal instinct, Victor just wants to rescue his family, Tamara is motivated by greed, and so forth. Very simple, very basic, and very well done.

You can read it as a self containing book, or as book 4 of the The Asteroid Wars series or as part of the grand tour series.

You can find it here on audible.