The next book in Ben Bovas series of the expanding humankind through the solar system is “The Silent Wars” and the title is mostly about the fact that all 3 major sides of the wars that the book is about is paying off the news services to avoid to much publicity on old Earth.

When we left off the two competing mega-corporations (Astro – the independents, and Humphries Space Systems – owned and dominated by Martin Humphries) was locked into war about the resources of the asteroid belt. 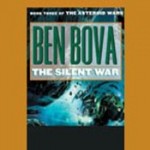 The opening of the book starts 6 years in the future when Martin Humphries, a truly bad guy, is being led to a newly discovered alien artifact by a cyborg he suddenly recognizes as the psychotic killer he hired named Dorn (Previous Doric Harbin). Then the story shifts back 6 years again when the war starts.

We then figures out that its not only the 2 old antagonists but also a new third mega-corp (Yamagata) that plots, then acts, to have the other two at each other’s throats in a very bloody war deep in space, with Yamagata planning on surviving behind the scenes to pick up the pieces and wrest sole control for themselves over the ashes of the others.

The fourth major player in the book is the independent government on the Moon serves as a counter-balance to the three corporations, being both principal supplier of war materials and a neutral adjudicator. They are lead by Douglas Stavenger, the political power on the Moon.

As usuall in the Grand Tour series, its hard to lay down the book, as its dam fascinating and Ben Bova talks about the good abd bad with nanotecnology for intanse. I would definitely give this a plus 4 so its a must read.

You can found this on audible here.