The third last book in the Grand Tour series is Venus (atleast for now). This is the story about Van Humphries, Martin Humphries son, and his trip to Venus, where he should recover this older brothers remains.

The surface of Venus is the most hellish place in the solar system. The ground is hot enough to melt aluminum. The air pressure is so high it has crushed spacecraft landers as though they were tin cans. The sky is perpetually covered with clouds of sulfuric acid. The atmosphere is a choking mixture of carbon dioxide and poisonous gases. 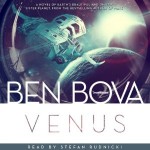 Years before, Van’s older brother perished in the first attempt to land a man on Venus. No one knows what has happened to him. Van Humphries is seen by his friends, family and colleague as a do-nothing playboy, and when his father announcing that Van is cut off, Martin Humphries offers a ten billion dollar prize to whomever can retrieve the body of his eldest son from Venus. Naturally, this forces Van to decide to go to Venus.

And when Humphries’s nemesis, Lars Fuchs, also enters the race its getting even more interesting.

This book is more or less a story of the awakening and maturing of Van. Hes struggles to get rid of his fathers scorn and his own week and uncooperative body.

As usual in all Ben Bovas books there is a hint on sexual tensions between the different main characters.

You can find the book here on audible.