Well back to real life. I started my computer career way back in the 1970's. In high school when I was 16 we started with programming or computer science in school. It was a very short course. We had 2 terms and each term had 20 hours of programming. And this was learning basic. On a HP 9830 computer. I hink it. was a model b, but I'm not totally share.

The school i whent to had one of these and we learned programming on it. It had the main computer case, where the keyboard was. A small display of one line and 32 character I think, I memory servs me right. It also had a thermo printer on top, for longer listings.

As we where many in the class we where not allowed to type directly on the computer, so we where using a opticial punch card reader. We used a pencil to mark “hole” on the card, and then run the bunch of cards throu and then, if all was right, run the program.

So this was My “frist” computer.

The hp museum has an nice page about the hp 9830 computer. 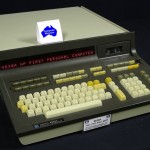 It had a huge ram memory of 3520 bytes, so you could not make big programs. 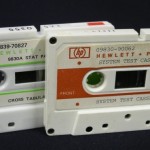 When you wanted to store programs, you could use a tape drive and save the programs on it, so that you did not have to tape it in again.

When we had the first 20 hours of computer programming we did not use the keyboard but had to do it in that optical punch card. You wrote down your code on a pies of paper, and tried to debug it as hard as possible. And then you transferred it to the optical punch cards.

Me and 2 of my friends of mine was interested in the computer, and wanted to do more than just do that little progra, we where taught at the classes so we asked the head teacher of our school if we where allowed to use the computer aft classes and in spare time. And we got permissions.

It was a fun time. We where into computer games and one of the first books of my own that I got was 101 basic computer games. It had a lot of games and we tried a lot of them and played a lot of them. Among others there was a “Super Star Trek” where you where the captain of the enterprise and tried to defend the galaxy against the evil Klingons and romulans that where invading the peas full space.

So after a while, we did know that computer quite well, and was having fun. The computer had a wonderful plotter (as a hp machine you could kind of expect that) and we started to play with the plotter.

It could make woundedfull graphs, and we did a small program, from the scratch – my first own program – that took an formula on the input line, and then made a nice graph of it on the plotter.

So next year we hand a course in technology. This means that we did learn how to construct things. All the way from how to do the design calculations to know how much materials you had to have in the different part to make the stuff work without breaking. The on to do the design drawings.

For the design calculations you hade to produce a lot of charts demonstrating the stress off different parts. And remember this was way back in “the old days” when this was made more or less by hand and not in computers. So we had to learn all the stuff ny hand. And as we had a good knowledge of the hp computer and did know how to make nice graphs on it, we made all our graphs on the computer. And we did get a wounded full score on that task. So good in fact that the teacher decided that next year all pupils had to turn in the graphs made by the computer.

So half of the school loved us as they tried it get the code from us, and the second half hated us as they had to learn computers.

After that the school got an abc80 computer and we got à full screen Witherspoon 40 x 24 characters, and you could even do som graphics.

So this is my start in computers.

2 thoughts on “My start in computers”