I have now finished the next book in the Grand Tour series of Ben Bova. This was “The Rock Rats”. It is the Second book in the Asteroid wars series and take place after the book The Precipice  and before The Silent War.

When we left the space in the last book, space industrialist Dan Randolph died and left Astro Corporation to his protege, pilot Pancho Lane. 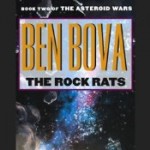 Then there are Amanda, who has become Lars Fuchs’s wife. Martin is madly in love with here and wats more than anything else to get his hands on here, in a literary sense.

When Amanda Cunningham marries Lars Fuchs, Martin Humphries conceives of a clever plan–give the couple a spaceship as a wedding present and send Lars out on a wild goose chase. While he’s gone, Humphries is certain that he can persuade Amanda to join him in his bed–and as his wife.

When Amanda decides to join Lars on the ship, Humphries has to scheme more deeply, setting off piracy and violence in the anarchic asteroid belt. Martin Humphries send out his hired killer, Dorik Harbin, to kill off independent miners/prospectors in the belt to force them to start working form him.

The book is good but there are some problems with the characterisations here. In the first book Amanda is a very intelligent and Last works together with her. but in this book Lars is more or less putting Amanda on a pedestal. Buy besides that its a thrilling book and hard to put down. A 4+ rating.