I have been using my new iphone 4 for quite some time now but there has been some things I have not gotten right. And this will show you some tips and tricks that I have found that helps you fix and set you phone to do “the right thing” at least in my opinion.

I have added a list at the end of all commands I have found.

I learned that voice commands existed from my friend Andrew quite some time ago, but I never got it to work. Saying I wanted to call “Ylva” (my daughter) the phone said it wanted to call Lassse Andersson or some one else – and not one I think sounded like. But now I have got it to work. You change the settings to Swedish and now it understands my pronunciation for family and friends.

It’s great to be able to voice dial friends, especially while driving. But you don’t have to use only the callee’s name; you can use their nickname as well. You can set this up in the Contacts application.

Goto the person you want to add a nickname to and add a new field, select nickname, type it in and save. Now you can use that also to call.

Turn off an application

IOS 4 gives you real multitasking. But that also means that you can have a ton of applications running. And I think this can drain battery power. So I usually turn off applications that I don’t need. You do this by double-tap the Home button. This will bring up the running process bar. Just tap and hold on a running app and a “-” button appears against all of them. Tap this to kill the app.

One of my problem has been that I write half of my text in English and half of it in Swedish. So no matter what language I spelled in I sometimes got it wrong. So I had spelling correction turned off. But there is a way to solve this. Add a UK Keybaord as one more international keyboard.

This will give you an extra globe symbol on the keyboard and you can press this to switch between Swedish and English keyboards and the spelling and correction follows that to.

And while you are in there, there is one more think you can do and that is to fix/add things to you User Dictionary.

Apparently if you chose to ignore a spell suggestion for a few times, the system will learn this. But you can also add words to the user dictionary directly. If you open Safari and open a new page and type a word into the google search box it will be added to the User dictionary and the system will after that not suggest a weird spelling to you.

There are some that say that you can get Edit User Dictionary enabled by Adding a Chinese keyboard, but that gives you a translation between character and glyps so its not doing the same thing.

I am using my phone quite a lot as an iPod. I listen to music and audio-books so I often has to press pause. And as I both hav auto-lock and pin-code turned on I had to press home, swipe, enter the pin-code. And then I could press the pause.

There is a very good short-cut for that. Press Home (from sleep mode) and then press home twice. This will bring up the ipod controls without you having to go thou the normal swipe, pin-code procedure.

If you want to change your typing to capital letters all the time, rather than just for the next letter, then double-tap on the Shift key on the iPhone’s keyboard. It will now turn blue, indicating caps lock is on. Just tap it again to turn it off. You can turn off this feature in Setting -> General -> Keyboard -> Enable Caps Lock.

I usually wants to call back when I get a sms. And the call button is on top of the messages so I have to scroll up and up and up….

Well there is a short way to do this also. You tap on the top bar (where the clock is) and it will scroll to the top of the page, list or so.

I was wondering how to take a snapshot of an application when I started to write about the applications I’m using, and I looked for an app that does this. And you don’t need that so I could not find one. You just press the Sleep button and then the home button. You will hear a shutter sound and the snapshot is in you camera roll.

It’s hard to explain, but once your learn this trick, it’s pretty fun to use. Instead of simply tapping Shift and then tapping your letter when you want the capital format, do this: tap Shift, drag your finger to the letter you want to capitalize, and release. It’s a bit odd at first, but I think it’s probably slightly faster.

This trick is even better when you’re going for punctuation: just substitute Shift with the keyboard switcher key (123/ABC). The beautiful thing here is that after inserting your punctuation, you’re back at the alphabet keyboard: definitely a time-saver.

One nice thing is the .com button when you type a webaddress. But there is more. If you tap and hold you will get a list of other ones. And if you have a international keyboard it will show that to. So i have .se there.

Send a Call to Voicemail

Everyone has experience this. The phone calls and your in the middle of someting – or you see a call from someone you dont want to talk to. When this happens, you can easily send the call directly to your voicemail. Simply press the sleep button twice (once silences the ringer, the second cancels the call).

Within the iPod app, in the bottom toolbar, you have four options and the “More button”; not new information. But did you know that if you tap the edit button in the top left corner of the More menu, you can decide which options are on the toolbar?

Just drag one down to replace those currently there, and tap Done when you’re finished. This tip works for most apps that use this type of toolbar.

Use the Timer to Turn Off Your Music

It’s great to fall asleep listening to your favourite music. However, you don’t your iPhone playing music all night. Apple has provided an easy solution.

Within the Clock app, set a timer for however long you want the music to play. Then, instead of choosing a ring, choose to Sleep iPod when the timer ends (it is at the end of the list of ringtones).

Did you know that the iphone has a very good calculator. If you turn it 90 degrees you will see that it also has a Scientific mode. Cool? 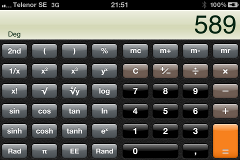 Here is alist of all different controlls and butttons. Just to have it in one place.

One thought on “My top iphone tips and tricks”