On Saturday it was time for the London meet up of my online corporation NIX (Phoenix Industries). We have been talking about meeting up quite some time and now it was finally time.

I trawled to London earlier in the week so i was kind of in place at our office out in Harlow already but Wollarie was coming in from Germany in the morning and Lasha was travelling down from the Midlands in the morning to. And I took a train in. We were supposed to meed with Blan and Alexej also but they got IRL things to take care of and as usuall the IRL business has to take precedence over internet spaceship.

We decided to meet up at Trafalgar Square around 12. I took the train in from Bishop Stortford and was at Liverpool Street station around 11:15 and the out and got the bus to Trafalgar Square. We were meeting at the stairs in front of the National Gallery and i stood there waiting. After some minutes Lasha called me and after some looking around we found each other.

Wollarie had been travelling from Germany since far to early so he was a bit hungry for some lunch so we decided to stop at a Pizza Hut on the way up to the hotel. After a long lunch with 2 or 3 fill ups of the cola we decided to move on up to the hotel. Both Lasha and Wollarie was at the same hotel so that was easy. Well it was a bit strange as One was in the main building and the other room was 1 block away, but that’s how it was.

We took off out to town and a Starbucks, as they usually have free internet wifi there, and also for some coffee. Unfortunately there was not any wifi at the Starbucks at covent garden so we could only satisfy our coffee urges.

After a bit of check-up with what people likes or dislikes we decided on Indian food. I really loves that as we don’t get that as much home in Sweden and apparently the same goes for Germany. So poor lasha had to come a long also :). We stopped in Covent garden as there where some free Wifi there and we checked to see if any one else was coming or so, and found out among other things that TQ was down. Well we where not going to play just now so that did not bother us to much. 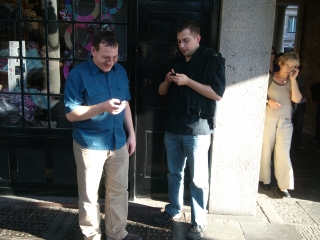 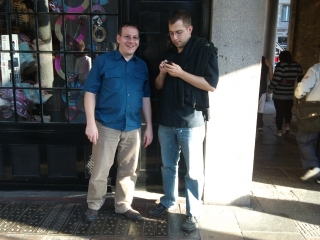 We had a wonderful meal at a restaurant somewhere between covent garden and trafalgar squeare. A nice micture of meat, Tandori meet and the Chicken TikaMasala. And Naanbread as I really like that. Nice.

Then it was time for beer or alcohol. We started in one of the bars in covent garden and had a nice bottle of wine (lasha cant have beer poor him) and we had a long discussion about EVE and skills and skilltraning etc. 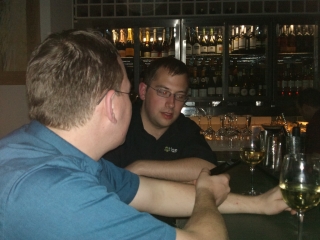 Then we went back to the hotel and I had my guinnes 🙂 As i was getting a bit tired, I headed back to Liverpool street station around 10 and got one of the fast trains out to Harlow and Stansted so I was in Harlow around 11:30 and back in Much Hadham just before 12.

A very nice meetup and thanks to bout Lasha and Wolarie that came over, and we hope we can do this again and with a bit more planning get more people to come.