The book I read and had in my timeline was “Jupier”. But after reading that and the next one “The Rock Rats”, I think that it should have been read after the rock rats. But I did read it in this order, so here we go.

This is the first book where the plot is around Jupiter, and the sequal is “Levithans of Jupiter”. 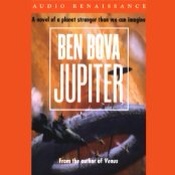 The main person that this book is about is Grant Archer.

When the book starts he jut graduated from school and is about to do the mandatory public service that the New Morality (the fundamentalist that rules america in the 21th sentry) demands of the citizens. Hoping to be able to study the nature of black holes at the far side of the moon, his wishes is crushed when the New Morality demands that he goes out to the research station Gold, that orbits Jupiter.

They not only demands him to go there and leave his love back on earth, the also demands that he should spy on the scientists on the station and what they are doing.

Apparently the scientists there has discovered intelligent live deep in the atmospheres of Jupiter, or actually, in the wast see that forms around Jupiter. Well that is wat the rumours say at least, and that is what Grant have to figure out.

The narration by Christian Noble and David Warner is good and crisp, but I have to say that Stefan Rudnicki is reading the other book better and makes the differen persons personalities more vocal.

I think that it’s a very good read and that it gives you lot of things to pounder after the reading. Another definetly toy 5 star book.