After the return to mars, it is time for the first book in the “asteroid wars” part of the grand tour series.

According to the timeline it happens after the second mars book. 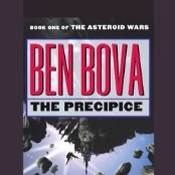 The moon base is now in operation but is suffering from a number of problems. One is that the resources of the moon is great but some elements is mission.

Earth is suffering massivly from environmental disasters and Dan Randolf would like to solve the problem with help of the space industry. Martin Humphries! The main man behind Humphries Space Industries also thinks that this is the way for going forward, but he doesn't care about the problems on earth and thinks more of his own personal welt. So a lot of the book evolves around the ongoing struggles between this to persons and the companies that they run.

To solve the problem with shortage of materials for both the moon and the earth Dan sets out to explore the asteroid belts, with 3 more people. Pancho Lane, Amanda Cunningham and Lars Fuchs. Amanda is the person that Martin wants to marry, but she is not interested. Without saying to much, she falls in love wih Lars and this sets up a plot and storyline for future books in the series.

Stefan Rudnicki is one of the performers and the producer of this book, and a full cast production like this is wounderfull to listen to.

Another must read in the series, and if you are going to read any of the asteroid wars book youvdefenetly should start here.