The next book in the “grand tour” series is now done – This time its the Moonwar book.

Its a direct sequal to the Moonrise book. 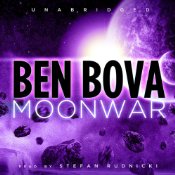 This book take place about seven years after the events in moonrise.

Douglas Stavenger has watched his fledgling lunar community prosper over the past seven years. Nanotechnology has been abandon in almost every part of earth but moonbase is still working with it and its nessesary to the life here.

But UN wants them to stop. George Faure, UN secretary-general, isn’t afraid to start a war to get what he or UN wants. He has an army of peacekeepers to enforce his wishes. What, exactly, he actually wants to achieve is much sketchier. He’s a diplomat/bureaucrat — obviously there’s a hidden agenda.

The big problem for Moonbase is tha they have no weapon. Doug tries to rally support the scientists upon the moon must create a way to prevent disaster, without any weapons at their disposal.

And there are the New Morality that also thinks that Nanotechnology is a abomination against God. And also wants to shutdown Moonbase.

The voice of Stefan Rudnicki makes an excellent narration of the book as usual.