As I mentioned before, Kubuntu 10.10 is using pulseaudio as default. I am very happy with this and its working great. Bet the last few days it has been having a problem. The kmix application is using 100% CPU. As I have multiple cores its not that noticeable but it is annoying.

I did some googeling over the past days and there are problems reported with kmix and pulseaudion, and I am a bit confused that they say that kmix and pulseaudio is not an issue as its not supporting pulseaudio. As I remember there was notes in kubuntu about fixes to kmix to handle pulseaudio better.

Well any way. I have now stopped kmix, with kill -9 #, and started up old pavucontrol instead as this seems to solve the cpu problem.

The only problem now is that kmix apparently was the process that took care of talking to my machine and the sound button on-top of the keyboard. But i can live with that.

Had to do a bit more. The kde started up kmix by default any-time I logged in, so you have to go into system setting, “Startup and Shutdown” and then “Session settings” and add kmix as a application to be excluded from sessions and then it wont start up: 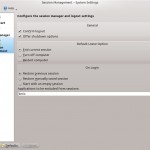