This STO Mission takes you outside the Sirius Sector Block to the Kassae system in the Regulus Sector Block. You will meet some Gorn forces, fight them in space and on ground and event be a fire-fighter for a while.

Once you warp in to the Kassae system, you will be infomed that several Gorn ships have been spotted in the system, and they are blocking your path to the station you’re there to check out. You’ll have to take care of them before you can proceed. Not a big deal.

A small sidenote – I usually scan for anomalies when I get into a system just to be able to pick them up. There where a few in here and one lead to the battleship you will fight in the end, and that lead to the mission got totally screwed up. Just scan and get any near ones when your in there and get the rest at the end of the mission.

Onboard the Relay Station 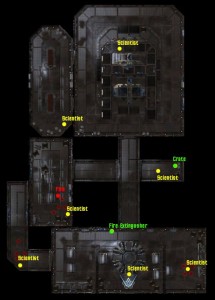 When you beam into the relay system, ine of the Researcher comes up to you and you can talk to him. He will inform yu what they are doing and that there are fires onboard and it needs to be take care off.

So after talking to the first Researcher and letting him beam to the ship, go over to the other side of the room and pick up the fire extinguisher from the wall on the left of the exit.

The first fire to take out if now to the right of you – at the north east end of the room. And in the room behind that is the second researcher that needs to be take care off. Fight off the Gorns that are surrounding him and free him and send him up to the ship.

On the weast wall of the room you came in to is the small hallway leading up to another room and there are one scientist in there that needs to be set free.

All the time take out all fires you see.

Go up to the next room and in the south-east corer of the room is the next researcher.

In the room here is a fire behind and between some crates and tubes that you usually dont see directly. Take it out also if you want the accolade.

Go out in the hallway and over to the hall on the other side. Here is one more researcher that needs to be beamed off. He has no Gorms around him. In that room there is also a crate that you can open to get some loot.

Go up to the main room and there is one researcher on the walkway that you need to take care off. Kill off the Gorn forces there and take out all the fires around the room.

In the room to the west of the mail root is the last researcher behind a wall of fire. Take it out and talk to him and let him beam back to the ship, and you have finished off that part of the mission.

When you are back on your ship you’ll warp into orbit of Kassae IV and find yourself immediately atacked by Gorm ships. Kill them off. And then take care of the second group of ships.

Once the skies are clear, you can beam down to Kassae IV.

Three energy towers power a shield that prevents you from reaching the archeologists being held hostage in a central building. You’ll have to work your way to each tower, taking out any Gorn who stand in your way. One guide said that the easiest way was going to the centre and the out to each tower. I tried that first and got killed intermediate.

I then tried to do it over land and tht worked well. As in all ground battle its important to not get to much aggro at the same time.

Once all tree generators has been disabled, the shield surrounding the central building will fall. Go there to take on the Gorn captain. Once you attack, he’ll send out his herd of Attack Saurs. Deal with them in any order you wish, just make sure the Captain gets taken out.

You will not succeed to kill the Captain, because he beams back to his ship before you can kill him. Once you’ve taken out the remaining Attack Saurs, beam back to your ship to take him on again.

Back in space, you’ll discover that the Captain has beamed aboard a Gorn battleship, which you must now defeat. He’s also taken the missing researchers hostage onboard, so you’ll have to beam them out before destroying him.

Keep your distance from the battleship, as it uses both mines and a radiation cloud that can do severe damage to your ship. Stay back and chip away at his defenses with your phasers and torpedoes.

Once you’ve taken the ship’s health down to around 25%, you’ll be able to beam the hostages aboard. They’ll asked to be beamed back to the planet to continue their research and your mission is complete. Congratulations. Contact Admiral Quinn for your reward.