Your first STO Fleet Action mission you will encounter is Starbase 24. After accepting this missions from Admiral Grigori Yanishev, you will go to Starbase 24 and warp into the midst of a huge space battle, then be asked to rescue some scientists and fly them to safety. Along the way you’ll contend with a Klingon fleet and explore what’s left of the doomed starbase.

The first part is to kill 50 Klingon ships. Any of the ships in the zone will do, so try and avoid the tougher battleships if you can. You’ll need them alive later, anyway. This is a fleet action, so everyone’s kills go toward the total.

After the initial 50 ships are destroyed, you’ll then be asked to take down 20 Klingon Battleships. These bad boys are tougher, and you’ll definitely need to work with other players to take them down. The Warships are the ones you want to concentrate at this stage. Don’t get so caught up targeting them that you forget the other ships, tough. They can still hurt you, and failing to take out a whole group before you move on is a good way to get your ship destroyed.

The space battle is not that strange. Remember to keep together with the others and keep you shields up and you will survive. If you do go down its not that bad. You will respawn at the entry point and be able to get back into the battle.

The next part of the mission is to go down to the starbase and rescue some scientist. And there are klingons to fight of.

Your task on the starbase is to rescue six scientists and download data from the station’s computer core. 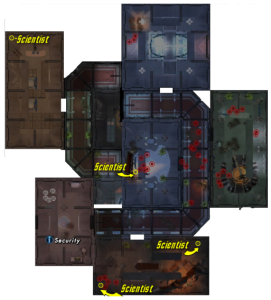 As you beam down enter the hallway, you’ll see a group of Starfleet personnel fighting some Klingons.

A small tip in all klingon fights: If there’s a Targ Handler in the group, make sure you take him down first. These guys spawn Targs repeatedly until they’re dead, so get rid of them first.

You’ll find the first scientist behind some crates in the Southwest corner of the to the right in the coridor. Kill the klingons around him and then talk to him. He’ll beam to safety aboard your ship.

The next scientist is at the Northeast end of that same room. Talk to him as well.

The room across the hall has no scientist, but there is an arms locker to loot and an anomolous reading to analyse.

Down around the corner, in the Northeaster room of the level, you’ll find the fourth scientist cowering behind several Klingon guards. Take them out and get him out of there.

Down the Turbolift – Level 2 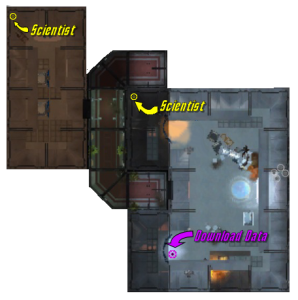 Go back out into the hall and take the nearby turbolift downstairs. The fifth scientist is behind a desk in the first room on the right. He’s back in the corner, so make sure you explore the room thoroughly.

Down around the corner is the final room. More klingons on the way there.

When entering the room, the last scientist is on the Northwest corner of the room. Beam him back to your ship and safety.

The computer core is to the right as you enter the room. There are some klingons around that you need to take out, as the download can be interrupted. Walk up to the console, use it, and then beam back to your ship.

Rendezvous With the U.S.S. McCoy

Outside, get ready to engage full impulse as soon as the instance loads. You need to get your rescued scientists to safety, and the Federation Rally point is well outside the battle area. If you have trouble locating it, look for a circle on your map NE of the starbase. You may have to defend yourself if you get attacked, but get out there as soon as possible. The U.S.S. McCoy needs your help.

At the rally point, help the McCoy fend off it’s attackers. Afterward, move close enough to the McCoy to hail it. The rescued scientists will beam aboard and your mission is complete.